For those who are interested in my work through the years, I hope you will enjoy reading some of my books. For those who don't have access to such, for whatever reason, I offer some research highlights below.

"Rising from the Ashes of SIDA [Solar-Induced Dark Age]"

This article is one I initially wrote for the launch of ORACUL's independent website (ORACUL is a non-profit I helped found). We place it first in this listing of research highlights because it brings together many aspects of my work over the last quarter century – into an unintended summary of sorts. For those who would like to delve deeper into the subjects presented in this article, I direct you to my book, Forgotten Civilization: New Discoveries on the Solar-Induced Dark Age, available where most books are sold, and translated now into several languages. (For more on this book, please see my Publications page.) 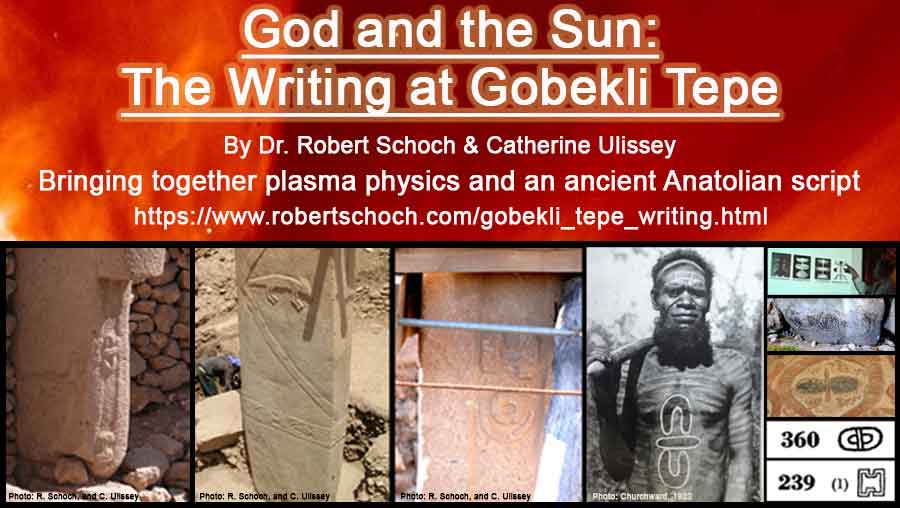 God and the Sun: The Writing at Göbekli Tepe

The world's first known written word at Göbekli Tepe on T-shaped Pillar 18 means God when connected to an ancient Anatolian script with roots that trace back to deep antiquity. Remarkably, the symbol deciphered (the word) is also a plasma configuration. The full meaning of this symbol may be a profound message for humanity -- and it comes to us from before the end of the last ice age, from a megalithic pillar that according to the traditional story of the rise of civilization should not exist. This article could not have been written without my wife Katie. Her contributions to it, in terms of research, writing, and editing, were invaluable. Here is the link to the article. 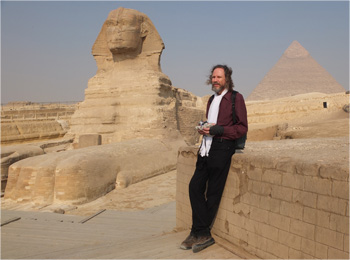 The Great Sphinx of Egypt

Many people know me best for my work on the Great Sphinx of Giza, Egypt. The Great Sphinx sits near the Great Pyramid on the western bank of the Nile, outside of modern Cairo. According to standard Egyptological thinking, the Great Sphinx was carved from the limestone bedrock on the orders of the Old Kingdom Pharaoh Khafre around 2500 BCE; however, based on the geological evidence this is wrong. I have concluded, based on analyzing all the data, that the proto-Sphinx goes back to the end of the last ice age (which came to a close circa 9700 BCE), and originally the statue was not a sphinx at all, but a lioness. Read more... 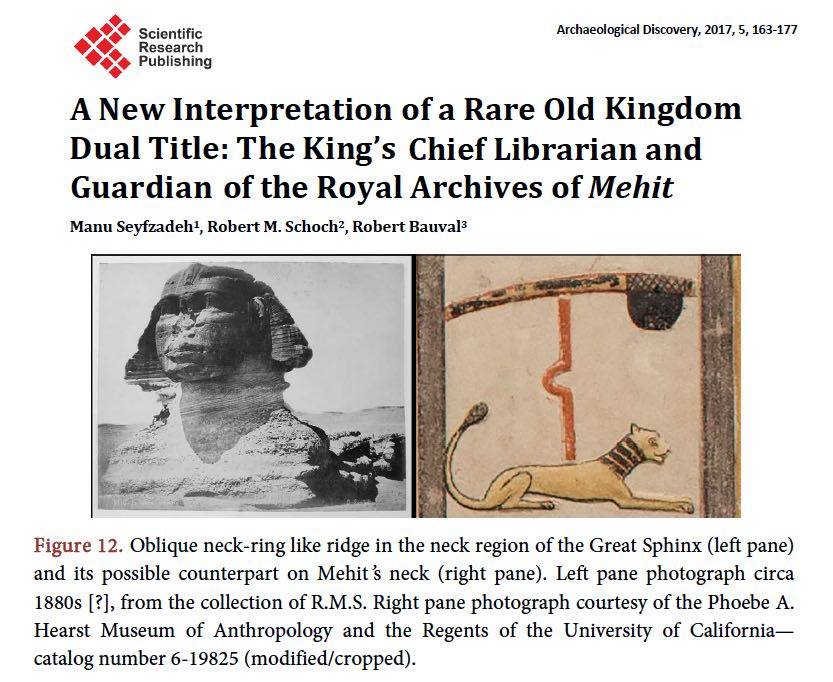 The Great Sphinx: She was the Lioness Mehit who Guarded an Ancient Archive

A new discovery has been made, by Dr. Manu Seyfzadeh, which supports my contention that the Great Sphinx (in its earliest form, prior to the dynastic re-carving of the head) existed on the Giza Plateau before the reign of Khafre and that it guarded a chamber beneath it. We now have evidence that it was referred to in writing by the earliest Egyptians. Furthermore, the original form of the Sphinx was that of the lioness Mehit. This discovery was first published in the peer reviewed journal Archaeological Discovery. However, I've also written about it here on my website. Click here (or on the accompanying photo) to stay on this site and read more...

Click the following if you would like to go directly to Archaeological Discovery where you can read online or download as a pdf the original publication (authored by Manu Seyfzadeh, Robert Bauval, and myself). Note: Lovely photos and illustrations accompany both postings; however, the journal article includes a few rare photos for which I could not obtain copyright for posting here. On the other hand, you may find the article posted here on this website a little easier to read (a little less "academeeze"). 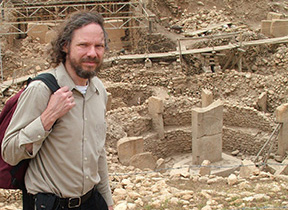 Göbekli Tepe is an incredible site in southeastern Turkey that dates back some 12,000 years, thus corroborating my long-held contention (based on my re-dating of the Sphinx) that an earlier cycle of civilization existed thousands of years prior to the supposed origin of civilization a mere 5,000 to 6,000 years ago. Read more... 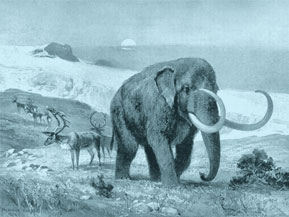 Plasma, Solar Outbursts, and the End of The Last Ice Age

15,000 to 11,000 years ago Earth experienced a series of climatic fluctuations. It had been extremely cold, with continental glaciers extending much further than they do today, but the climate started to warm. However, temperatures suddenly reverted back and there was a short cold spell, known as the Younger Dryas, before the final warming and the official end of the last ice age. Read more...

Yonaguni is a little island located in the far southern portion of Japan. Submerged off the coast of Yonaguni are a series of mysterious structures that appear to be giant steps carved out of the bedrock. Indeed, viewing photographs, or even diving the site and superficially inspecting the monument, it looks like the side of a step pyramid, but a step pyramid covered by the ocean. How can this be? One suggestion is that in fact this is a step pyramid, and it was originally built on land a very, very long time ago. It is known that sea levels have risen substantially, by a hundred meters or more, since the end of the last glacial period circa 12,000 years ago. Could the Yonaguni Monument be a remnant of a pre-glacial civilization that was inundated with the rising sea levels? Does Yonaguni represent the physical remains of the legendary lost continent of Mu (sometimes referred to as Lemuria, essentially the Pacific equivalent of the lost continent of Atlantis)? Read more... 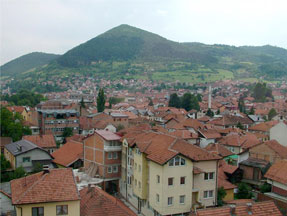 The so-called Bosnian Pyramids have made news around the world, although sometimes the news is not so much about the supposed pyramids but the fraud involved on the part of the Bosnian pyramid proponents. I have examined carefully on-site the so-called Bosnian Pyramids, and will state bluntly that I did not see any evidence of ancient pyramids there. Furthermore, I am not alone in this assessment. Read more...

While visting South Africa in June 2014, I had the opportunity to view a reputed giant footprint located in a remote area about 300 kilometers due east of Johannesburg in the Eastern Transvaal near the South African town of Empuluzi (also sometimes spelled Mpaluzi) in Mpumalanga, which borders on Swaziland. Read more... 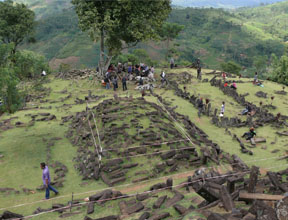 Gunung Padang, which I have visited first-hand, does appear to be a site that was constructed by humans. How long ago is the big question, but some very early dates, based on radiocarbon analyses, that geologist Dr. Danny Hilman Natawidjaja and his team are finding (circa the end of the last ice age, about 12,000 years ago) do seem to suggest we are looking at something very old. The site needs much further study, though; these are preliminary findings. The blocks themselves were formed by nature, by volcanic activity millions of years ago during the Tertiary period. They are igneous (specifically andesite) and were formed by natural volcanic processes. However, and this is very important, they form vertically in nature and are called by geologists columnar joints or columnar jointing. The issue at Gunung Padang is that they have evidently been taken from their natural vertical positions and laid down (arranged by humans) horizontally to create the structures at this site. There are definite and distinct comparisons to be made to Nan Madol in Micronesia. It is my feeling that the blocks were not quarried a distance away and then transported, but rather they probably occurred right there on site in this tectonically active region and were simply repositioned to form the ancient structures. It is also interesting that cavities or chambers have been found, using geophysical techniques, below the surface at Gunung Padang; they have yet to be explored. To my knowledge (I am writing in August 2017), no definitive artifacts have been found in association with the site (no sculpture, pottery, art, etc.). Perhaps more detailed excavations might reveal something along these lines. However, just as there is a push for broader excavation of Gunung Padang, so too is there opposition to it. It is a sacred site to many and they do not want it touched. 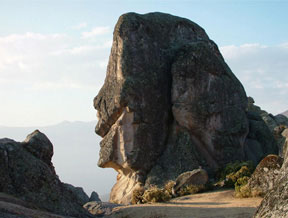 Peru is a fascinating land, rich in history and mystery. I always enjoy visiting, and one place I have focused on is the site of Markawasi. The Markawasi Plateau is located high in the Andes Mountains, and it is truly a very special site. Indeed, and I do not use the term lightly, I regard it as a holy, sacred site. To best experience the majesty and power of Markawasi, one hikes or rides on horseback or donkey to the top of the summit (there is in fact no other way to get there), and then sets up camp. It is an area to explore, and take in, letting the energy of the land envelope you and permeate your very being. The stillness, the desolate beauty, the high altitude, the towering rock formations, all combine to produce a rejuvenating and vitalizing effect. Read more... 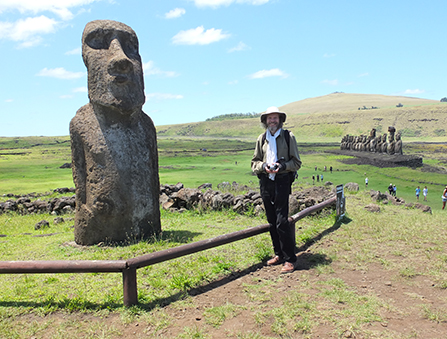 Located in the South Pacific, some 2300 miles (3,700 kilometers) west of South America, Easter Island is one of the most remote locations on Earth. It is a tiny island steeped in ancient mysteries. Here are found hundreds of giant heads and torsos carved from stone, known as moai. Some are up to 33 feet (10 meters) tall, and an unfinished moai is about 69 feet (21 meters) long. They boggle the imagination. How, when, and why were they carved and erected? Read more... 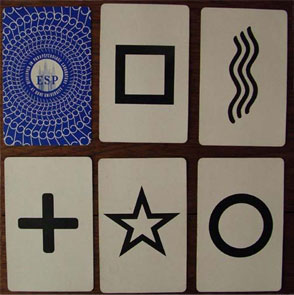 Commercially sold set of ESP cards (Zener cards), circa 1937, developed by Dr. J. B. Rhine and his colleague Dr. K. E. Zener to test for extrasensory perception in laboratory settings. (From the library of R. M. Schoch.)

I became interested in parapsychology and the paranormal, at least in part, through my studies of Ancient Egypt. According to the traditional view, what was the overriding preoccupation of ancient Egypt? Death and the afterlife. Say Egypt and pyramids (popularly interpreted as giant tombs), mummies, and the so-called Book of the Dead immediately come to mind. Having studied them in depth, it is clear to me that the pyramids, and the Great Pyramid in particular, were not solely or even primarily overblown mausoleums. Indeed, the Great Pyramid may have served both astronomical and astrological functions, literally being an observatory at one stage of its development, as well as ritualistic purposes. Many modern visitors describe powerful and life changing experiences in the Great Pyramid. One of the most famous is Napoleon Bonaparte. While in Egypt (August 1799) Napoleon visited the Great Pyramid. He entered the King’s Chamber, and asked to be left alone. Upon emerging, Napoleon was pale, faint, and silent. Asked by an aide what happened, Napoleon refused to say anything of substance, intimating that he had experienced a preview of his own fate. Just before his death in 1821, Napoleon appeared to be on the verge of telling a close friend what had occurred in the King’s Chamber. Then he hesitated, No. What is the use? You would never believe me. Read more...