Controversies Regarding the End of the Last Ice Age: Comet/Impactor or Solar Activity?

What caused the beginning and ending of the Younger Dryas has long been a point of contention, and the debate heated up when a “comet theory” or “impact hypothesis” was proposed in the 2000s. Various journalists, popularizers, and writers of semi-fiction and science fiction have picked up on and sensationalized the “comet theory” despite the weakness of the evidence. I have to admit that at first I was favorably disposed toward such a theory (I write about the effects of comets, meteors, asteroids, and other impactors in some of my earlier books); however, after carefully analyzing the purported evidence put forward to support such ideas, I am not convinced. I believe that solar activity can better explain the major changes at the beginning and end of the Younger Dryas. For the interested reader, I offer a few links below that give some background regarding this controversy.

Here is a link to a short video posted by Ben Davidson of Suspicious0bervers where it is pointed out that "unusual" solar activity (which may not be so unusual from a geological and astronomical perspective; indeed, it may be cyclical) can explain the features and evidence pointed to by the proponents of the "comet theory/impact hypothesis". The beginning of the video includes portions of a 2014 interview of me, but please make sure to watch the entire video to the end for some provocative new ideas proposed by other researchers, including the concept of "solar micronovae".

In 2015 I wrote a short article for Atlantis Rising regarding this subject. Unfortunately, the magazine has gone out of business. However, an expanded version appears as Appendix 9 of Origins of the Sphinx.

The following two links give some background on the controversies regarding the “comet theory”: https://psmag.com/environment/comet-claim-comes-crashing-to-earth-31180 and https://www.sciencenews.org/article/younger-dryas-comet-impact-cold-snap.

The following article discusses the evidence indicating that it was not a comet, but rather a massive glacial flood (which, I would point out, could have been caused by solar activity melting ice dams and glaciers) that changed ocean circulation patterns in the Atlantic, thus initiating the Younger Dryas cooling: https://www.washingtonpost.com/energy-environment/2018/07/11/scientists-may-have-solved-huge-riddle-earths-climate-past-it-doesnt-bode-well-future/?noredirect=on&utm_term=.6f7d7c278f5c.

Regarding the Hiawatha Glacier in northwest Greenland: Reading the actual journal article, and looking at the details of the stratigraphy, it does not appear to me to be Younger Dryas. As the authors write: "The sum of these tentative age constraints suggests that the Hiawatha impact crater formed during the Pleistocene, as this age is most consistent with inferences from presently available data.” (p. 9) The Pleistocene dates from 2.6 million years ago to 11,700 years ago. Impactors collide with Earth, no doubt, and this is evidence of such. But it has yet to be dated to the Younger Dryas, as so many apparently wish it to be.

Left to right: Aquarius (one rendering of him derived from images in the public domain), Robert Schoch, and Catherine (Katie) Ulissey.

Katie's article regarding Aquarius and the Cosmic Currents

Katie's first published article, which I am proud to share with you, is titled Does the Water Bearer Bring Forth a River of Fire?. It was originally written for the National Council for Geocosmic Research's (NCGR's) eNews publication, the April 14th, 2020, edition. Katie is a student of astrology (see her page on this website for more about her). My research, and the work she and I are pursuing together, led her to question why Aquarius, an astrological Air sign, is also called the Water Bearer. Is the term a warning from the Ancients? Did they possess an understanding of the cosmos that we are only now beginning to reclaim? I lent my name to the initial publishing; however, the writing is entirely Katie's. Click here to read more (and be sure to not miss her two important postscripts). 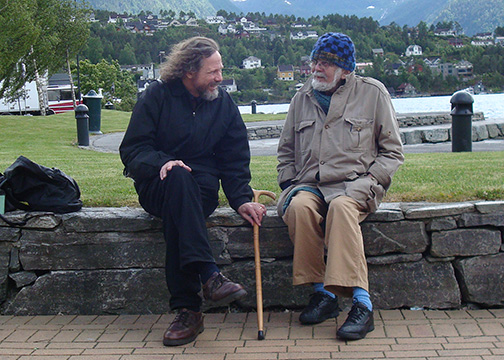 With John Anthony West in Norway (on an unexpectedly cold day).

Even though he had been fighting a battle with cancer for over a year, I was not fully prepared to learn the news that my dear friend John Anthony West (JAW) had parted from this world. There are no words to express the profound sadness and loss that I feel. One of the themes of his research, apart from our work together on the Great Sphinx, was dying and death from the perspective of the ancient Egyptians. I find solace in pondering some of JAW’s own words on the subject. Please click here to read more. And wherever he is now, I wish my friend a blessed journey. I will miss him greatly. 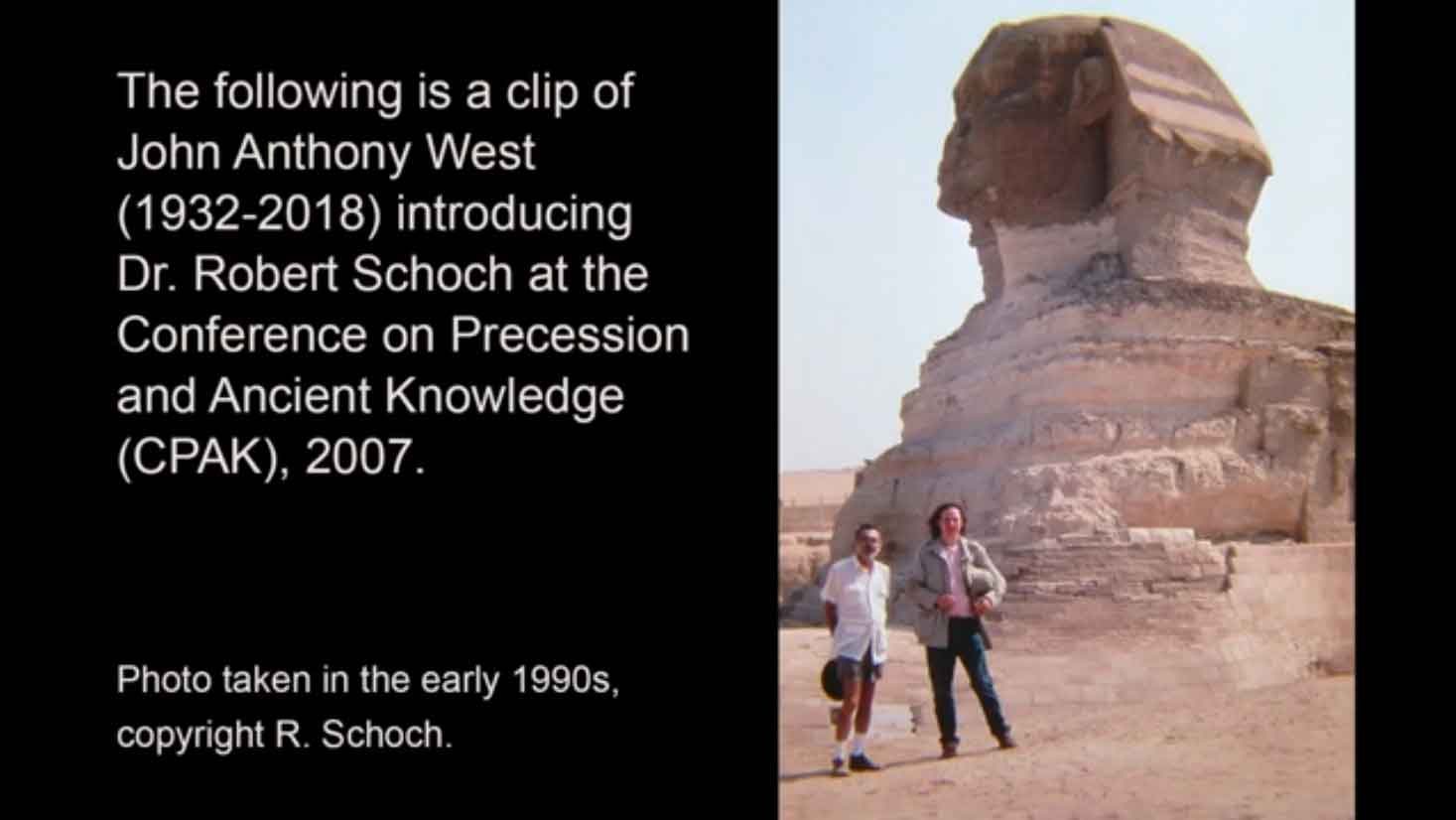 This short (4.5 minute) video, posted to ORACUL's YouTube page, offers a humorous accounting by John Anthony West of how he and I became acquainted and came to work together. It is one of Katie's favorite clips. Incidentally, it was also at CPAK 2007 that Katie and I met. 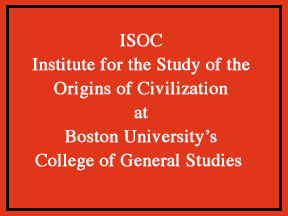 Boston University's New Institute for the Study of the Origins of Civilization (ISOC)!

I'm so pleased to announce that the College of General Studies at Boston University, where I have been a full-time faculty member for over thirty years, has established the Institute for the Study of the Origins of Civilization (ISOC) - in part inspired by my research into the antiquity of civilization (now supported by sites around the world, most notably at the breathtaking Göbekli Tepe in Turkey dated to the end of the last Ice Age). I am pleased to add that I have been appointed the institute's first director.

An ancient plasma strike right near the Great Sphinx and Giza Pyramids.

During the summer of 2016, while leading a tour of Egypt, two friends and colleagues, Yousef Awyan and Mohamed Ibraham, showed me a feature on the Giza Plateau that they suspected would catch my attention. Indeed, it did: a potential ancient lightning strike right in front of the immense Second Pyramid. Here is a video (initially posted to YouTube) of a few of us examining the site. I wrote an article about this important discovery for the November-December issue of Atlantis Rising, and I plan to discuss it further in forthcoming publications. Additionally, the banner image at the top of this page shows this plasma strike in greater detail. 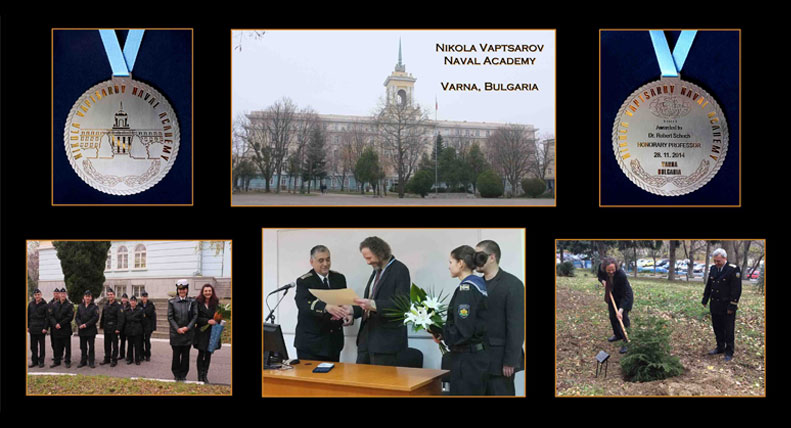 On 28 November 2014 I was awarded, in recognition of my ongoing research into ancient civilizations, the title of Honorary Professor at the Nikola Vaptsarov Naval Academy in Varna, Bulgaria.

My Research in a Nutshell

In 2015 I was asked by Boston University to give a master class of my research to a select group of its alumni/alumnae. This video trailer was made by the University for the event. Compressed down to less than two minutes, it encompasses highlights of my research over a quarter century, from my initial work re-dating the Great Sphinx (based on the geological evidence of water erosion on the monument and on the walls of its enclosure, seismic analyses, and much more) to my findings regarding a major solar outburst as a cause of the end of our last ice age and the decimation of the high civilizations of the time. More detail regarding this research can be found in my book, Forgotten Civilization: New Discoveries on the Solar-Induced Dark Age. 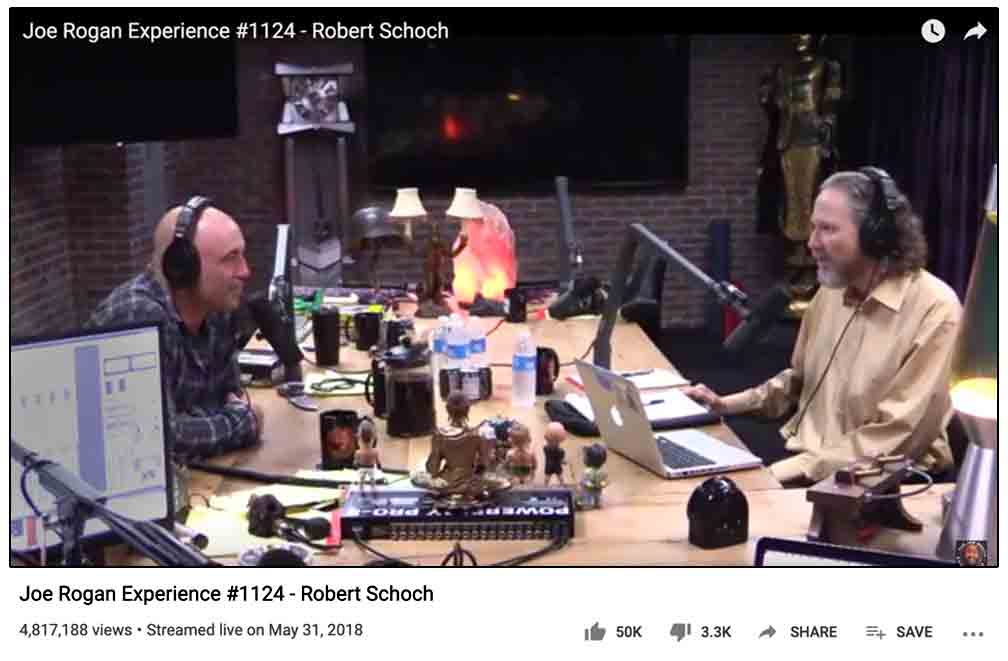 My Interview with Joe Rogan

In May of 2018, I was interviewed by Joe Rogan for his very popular podcast series. This interview was available on YouTube for many years, and as of October 2020 (the last time Katie and I noticed it posted there), it had been watched by close to 5 million people (with, according to Mr. Rogan, many more millions listening via audio-only downloads). I thank Mr. Rogan for introducing me and my research to his broad and enthusiastic audience. Last I learned, Mr. Rogan moved his programming to Spotify. The interview can still be viewed there, but (as I understand it) one must create an account first.